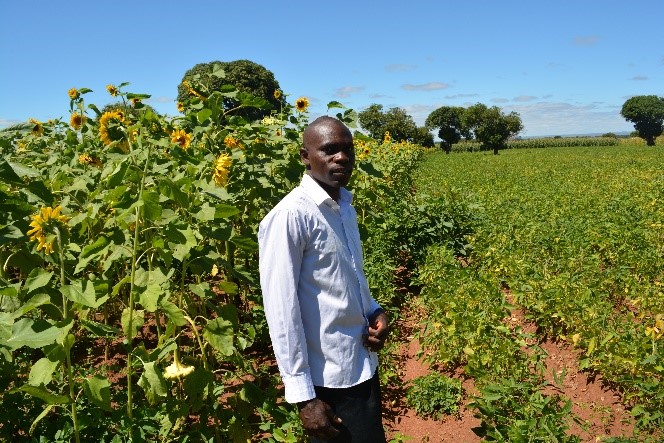 Farmers in Petauke District in the Eastern Province of Zambia are beginning to reap the benefits of participating in a Panos Institute Southern Africa (PSAf) project on community based natural resources management.

With funding from the Ministry of Foreign Affairs of Finland through the Civil Society Environmental Fund, Phase 2 (CSEF 2), PSAf is implementing the Deepening CBNRM project in Petauke, Katete, Kazungula and Sinazongwe districts. The project seeks to promote effective community engagement and involvement in sustainable environment and natural resources management, building the capacity of community members to engage in sustainable practices.

“Our goal through this project is to contribute to the attainment of environmental sustainability in Zambia. We aim to foster community engagement and involvement in the conceptualization and implementation of Sustainable Environment and Natural Resources Management interventions in Zambia.,” said Ms. Lilian Saka-Kiefer, the Executive Director of PSAf.

The Deepening CBNRM project was rolled out in May 2016 but some farmers, such as Mr. Nelson Zulu (in white shirt) of Chief Kalindawalo Area in Petauke are already counting the benefits

The project was rolled out in May 2016. Some community members such as 50-year-old Nelson Zulu of Chamanika Village, Chief Kalindawalo area, in Petauke District are already counting the benefits.  Farming is the main source of livelihood for Mr. Zulu. However, in recent years, crop yields have drastically declined to the extent that he contemplated quitting farming, his livelihood of many years, to go and look for a job.

“I have always sustained my family through farming, but in the last few years, things had become difficult. Unknown to me, the soils in my fields had become really weak and as a result, the harvest was becoming smaller with each season,” said Mr. Zulu.

Mr. Zulu knew that he needed to do something urgently. But his options were limited.

His best option was to increase the quantity of inorganic fertilizer he applied in his fields to boost his maize crop, but that option had its own challenges.

“The fertilizer is too expensive, and most of us cannot afford it. The other option for us was to get the fertilizer through FISP (the government supported Farmer Input Support Programme), but the challenge with FISP is that the fertilizer usually comes late,” said Mr. Zulu.

Running out of options, Mr. Zulu got a glimmer of hope when some development partners working in the district recommended conservation agriculture to him.

“Some experts encouraged me to consider conservation agriculture. They explained to me how it works, but I did not really understand. Some of the things they said sounded too good to be true,” said Mr. Zulu.

At first Mr. Zulu was reluctant to try conservation agriculture. But this changed when Panos conducted a stakeholder sensitisation on the Deepening CBNRM project. He joined Kawere Community Action Group and became a regular listener to Petauke Explorers Radio station, who are working with PSAf on the project. On the weekly radio programmes, Mr. Zulu would listen to experts speaking about how farmers could increase their crop yields through environmentally sustainable practices that enhance soil fertility.

Participating in community action group meetings and listening to radio programmes enabled Mr. Zulu and other farmers to interface with experts and get more information on conservation agriculture.

Mr. Nelson Zulu (left) and other members of Kawere Community Action Group listening to a programme on Petauke Explorers radio station and noting issues for follow up.

“The radio programmes provided me with more information about the benefits of using conservation agricultural practices. I do not need to go to the BOMA (district administration offices) to get the attention of the officials. We speak to the officials through radio. During our group meetings, we also listen to recordings from other communities in the district. The radio programmes are helping us,” added a visibly effusive Mr. Zulu.

According to Patrick Daka, the station manager for Petauke Explorers Radio Station, Mr. Zulu has become an active participant on radio programmes.

“Mr. Zulu never used to participate in our activities as a radio station, and he was not part of the community action group. But today, he is so committed because he has seen how radio has linked him with experts and other farmers,” said Mr. Daka.

Based on the information he got from the radio programmes and community action group meetings, Mr. Zulu decided to plant soya beans and sunflower. He also planted Gliricidia Sepium, a multi-purpose legume tree that boosts soil fertility and can also be used for live fencing, fodder, firewood, green manure and intercropping, among others.

“For a start, I planted 1,250 Gliricidia (Gliricidia Sepium) trees. These will soon become my fertiliser. I also planted soya beans and sun-flower, which I had never considered listening to the radio programmes. For me it was maize all the way,” added Mr. Zulu.

Based on information he received from radio programmes and engagement with experts, Mr. Nelson Zulu has intercropped 1,250 Gliricidia Sepium plants with maize

With the Gliricidia still too young to have an impact on the soils and result in instant high yields/crop performance, for this farming season Mr. Zulu used cow manure. The results were good.

He added: “As you can see, I am expecting a bumper harvest of maize, soya beans and sunflower. We have learnt that planting soya beans boosts soil fertility. This season I applied mostly cow manure, but next season I will use the residue from the soya beans. I will no longer lose sleep over high fertilizer costs or FISP delays.”

Through the Deepening CBNRM Project, PSAf has created a platform for citizens to engage with experts on sustainable ENRM. For this purpose, the project has provided radio sets and voice recorders to the community groups. The project works with various stakeholders from the government, traditional leadership and civil society. At the community level, the project has community action groups that have developed action plans to drive environmental sustainability in their communities.